TODD: Rush took a phone call once from none other than the iconic actor Charlton Heston who pointed this out. He asked the Maha if he could read from Michael Crichton's Jurassic Park. We have a portion of that right here.

RUSH: Charlton Heston called here one day and asked to read it on the air. And, you know, when Moses calls you and wants to read the tablets to you, you get out of the way and do it. This really is powerful, and it goes great with all of this hysteria on global warming and destroying the planet. Here is Charlton Heston from the opening chapters of Jurassic Park as written by Michael Crichton. 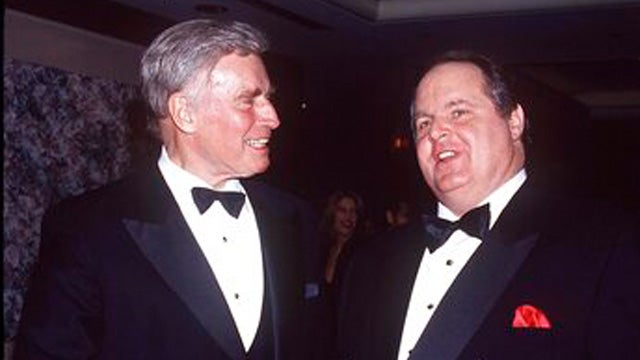 HESTON: You think man can destroy the planet? What intoxicating vanity. Let me tell you about our planet. Earth is four-and-a-half-billion-years-old. There's been life on it for nearly that long, 3.8 billion years. Mountain ranges thrust up, eroded away, cometary impacts, volcanic eruptions, oceans rising and falling, whole continents moving, an endless, constant, violent change, colliding, buckling to make mountains over millions of years.

Earth has survived everything in its time. It will certainly survive us. This planet lives and breathes on a much vaster scale. We can't imagine its slow and powerful rhythms, and we haven't got the humility to try. We've been residents here for the blink of an eye. If we're gone tomorrow, the earth will not miss us.

RUSH: That's the key. We haven't the humanity. This wraps up this whole global warming argument. We so lack in humility, and it's a contradiction, too, because on the one hand, the environmentalist wackos consider us irrelevant, we're no more important than the average rat or dog or insect, and in the other moment, we are so powerful and we're so negative and we are so destructive that we, humans, are destroying the planet.

And don't get confused. Global warming, they're not worried about what it will do to humanity. That's not the way they pitch it. They pitch it, the world, the fragility of our climate is in crisis. And, of course, Charlton Heston, they're reading from Michael Crichton and Jurassic Park, puts this in a great perspective. In fact, that passage one of the things that helped form my whole thinking on the concept of the complexity of all of this that is our planet and the impotence that we really have to do anything about it.

TODD: I was listening when Heston called, and that caused me to purchase that book, which caused my exploration into science of the earth. I remember that so well.